Based on an original Tele bridge-plate and is made from ‘Cold- Rolled Steel’. Our Bridge plates are artificially aged by a special procedur which changes the internal crystaline structure of the metal itself, which we then call “Internally aged”.
During the manufacturing process, tension is produced in the metal especially around the edges. At first, like most people, I didn’t pay any attention to this until one day I discovered something very interesting about a manufacturing technique used in the making of church bells(!): to prevent cracks from appearing and to help increase the vibration qualities (i.e. sustain), newly cast bells are very slowly cooled down and then afterwards heated up again to a certain temperature and again allowed to very slowly cool down. This process can be repeated several times and ‘relaxes’ the metal.
Out of pure curiosity I decided to try out this technique on a Tele bridge-plate. Using a gas-burner I heated the bridge-plate up to a very high temperature and then let it slowly cool down. I then hung it up with cotton thread next to an identical but untreated bridge-plate and tapped them both using a small beater and was completely surprised and astonished with the result: the heat treated bridge-plate rang noticably longer than the untreated version! The only disadvantage was that the chrome surface of the treated bridge-plate was completely burnt black, ruined in fact! So, do NOT try this at home! The T-Tune bridge-plate is nickel-plated after the heating process so that the results of the heating/burning cannot be seen!
When installed on a guitar the treated bridge-plate gives much more sustain and ‘twang’. The guitar is also louder and the tone clearer (not piercing or sharp!). The basic tone character remains, as the same material as a standard bridge-plate is used. Using for example, Stainless-steel or any other material would change the basic tonal quality! The feedback potential can also be increased so we recommend that High-Gain players use the version with the two extra fitting-screws which ‘control’ the bridge-plate and also increases the transfer of the string vibrations to the body. For Clean players or those that do not want to drill any extra holes in their guitar we offer the ‘standard’ version without these extra screw holes. 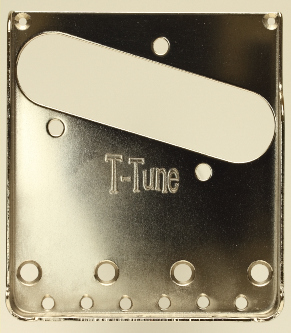 We use cookies on our website to give you the most relevant experience by remembering your preferences and repeat visits. By clicking “Accept All”, you consent to the use of ALL the cookies. However, you may visit "Cookie Settings" to provide a controlled consent.
Cookie SettingsAccept All
Manage consent

This website uses cookies to improve your experience while you navigate through the website. Out of these, the cookies that are categorized as necessary are stored on your browser as they are essential for the working of basic functionalities of the website. We also use third-party cookies that help us analyze and understand how you use this website. These cookies will be stored in your browser only with your consent. You also have the option to opt-out of these cookies. But opting out of some of these cookies may affect your browsing experience.
Necessary Always Enabled
Necessary cookies are absolutely essential for the website to function properly. This category only includes cookies that ensures basic functionalities and security features of the website. These cookies do not store any personal information.
Non-necessary
Any cookies that may not be particularly necessary for the website to function and is used specifically to collect user personal data via analytics, ads, other embedded contents are termed as non-necessary cookies. It is mandatory to procure user consent prior to running these cookies on your website.
SAVE & ACCEPT